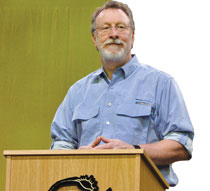 In 1986, a teacher named Harry Palmer created The Avatar® Course. That same year he founded Star’s Edge International®, the seminar management corporation that supervises the delivery of the Avatar Materials. Harry’s writings are a profound contribution to the growing body of knowledge, exercises, and processes directed to self-improvement. Many individuals and companies in the personal-development industry have adopted his ideas.

Harry Palmer dresses simply, lives simply, and remembers to open the door for the ladies. He looks at you steadily when you talk, and you get the feeling that he is interested in what you have to say; he is. In sharp contrast, he is also the CEO of a rapidly growing international corporation and the unexpected inheritor of a prestige that once belonged only to prominent spiritual leaders. This simple man’s writings are creating a movement that is sweeping the planet.

His bestselling book, Living Deliberately* (currently available in 20 languages) describes his personal path to enlightenment, and the subsequent insights that were to become the foundation of the three-section, nine-day Avatar Course.  (A prominent liberal arts professor described the Avatar Course as: “… an elegant blend of oriental philosophy and western cognitive psychology that provides a fast, experiential route to restoring self-determinism.”) *eLiving Deliberately (PDF version)

Harry’s lofty aim is to contribute to the creation of an enlightened planetary civilization®. This goal has been embraced by thousands of Avatar graduates from 71 countries.

In a private interview, Harry Palmer spoke about his strategy for contributing to an enlightened planetary civilization:

Q. The first question is why?

Harry: I’ve worked a lot of jobs in my life, and I’ve been successful at most of them. But the job that really excites me, the one that makes me feel good in my soul, is contributing to the creation of an enlightened planetary civilization. It is a motivation that comes from something deeper and purer than service to self.

Q. How do you describe yourself?

Harry: I wouldn’t…(laughs) Okay, I will. Hardcore visionary! The visionary part is because of my belief in an enlightened planetary civilization. I believe it will happen. The hardcore part is because I am actively committed to it, and I don’t give up on things I believe in.

Q. How do you plan to succeed when others have failed?

Harry: My plan is simple: help the people next to you wake up beyond their Darwinic mind dream. And after they realize who they really are, where they are, and what is happening, show them how to pass the lessons on. Of course, if you want their best, full-time efforts, there are economic and social realities that need to be considered and addressed. People like to help each other, but they also like to live comfortably and feel safe with friends. So the lessons must be valuable enough to the people who receive them that they are happy to pay a fair price.

One of the things that I have learned from life is that service to others, if it is done well and within a viable economic context, is contagious. Help someone; show kindness, and the next thing you know they are figuring out how to pass it on to someone else. That’s my strategy for contributing to an enlightened planetary civilization. I intend to create, within a viable economic context, an epidemic of compassion.

For a list of Publications by Harry Palmer author of the Avatar materials, visit our Oceania Avatar bookstore